BE AN EU TOURIST

On 4 September 2017 the newly constructed part of the road to Lipkovo lake, constructed in the frame of the project, was officially opened.

The stately ceremony was participated by the minister of environment and mayor of Lipkovo until 2017 Mr. Sadula Duraku, minister for local-self govrnment Mr. Suhejl Fazliu, representatives of the Cross-border program, representatives of the project partners from Bulgaria – the deputy mayor of Satovcha Rumen Orachev and the secretary of Prosveta 1937 cultural center in Pletena Antoaneta Bektasheva.

Opening of the new promenade of Bistrica river in Satovcha

On 20th December 2017 the new pedestrian zone with relaxation zones along Bistrica river in Satovcha, constructed in the frame of the project, was officially opened.

The mayor of Satovcha D-r Arben Mimenov in his speech underlined the significance of the implemented activities for the improvement of the social environment in the village.

A greetings speech in support of the future partnership relations was given by the mayor of Lipkovo from Macedonia Mr. Arifi. He underlined, that the development of the conditions for tourism is an important task for both partnering municipalities and that Lipkovo municipality has the interest the partnership with satovcha to continue also in the future. 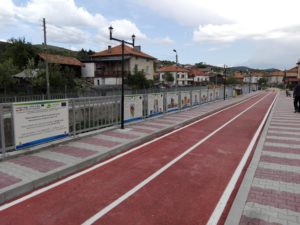